In Defense of Lolo Jones…

The 2012 Olympic Track & Field events have been filled with so much disappointment (see Brigitte Foster-Hylton and LaShawn Merritt) and even more drama. I’m not particularly sure when one of the most viewed sporting events in the world became this dramatic, but I think it’s safe to say something has really gone awry and US hurdler Lolo Jones has got caught in the crossfire. 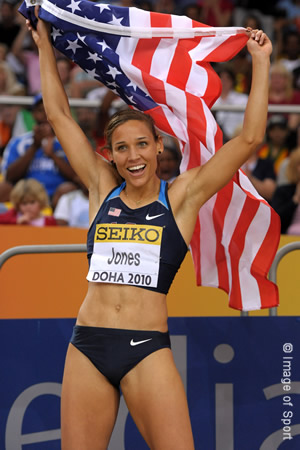 Lolo Jones getting fourth in the women’s 100m hurdles had Twitter buzzing and her name trending for nearly 24 hours straight, which is interesting considering she didn’t even medal. But alas, that is exactly why everyone has everything to say. All eyes were on Lolo waiting to redeem herself after hitting the ninth hurdle in Beijing four years ago…or at least that’s what we would like to think. But if you ask Twitter or Jere Longman of the New York Times, no one was looking at that at all. Instead we were looking at a breathtakingly gorgeous face. Nothing more, nothing less. In fact, when she did finish fourth, most people had one of three completely off-base reactions:

2. Lolo should’ve had sex (since she’s confessed to being a 30 year old virgin) and that would’ve helped or

3. Lolo is a disappointment and nothing but a pretty face with no talent or work ethic.

All three reactions are ridiculous, but the third is the most outrageous and farfetched. Longman wrote his derisive views of Lolo’s success days ago, referring to her as the result of “sad and cynical marketing” that only has her pretty face and sad story to offer. Longman completely disregarded the fact that she has numerous World Championship medals to her name and was favored to win in Beijing had she not hit that hurdle. Now let us recall Brigitte Foster-Hylton hitting her hurdle in the semifinals. Are we going to sit here and pretend she’s not talented too? Absolutely not. So why is Lolo the center of all this controversy? Why do we have US media outlets openly discouraging and disrespecting our athletes before and after they compete?

Either way, US Track doesn’t need people like Longman to degrade our athletes because we have people like Kellie Wells and Dawn Harper to do it for us. And no, I’m not firing shots at those ladies because they ran a good race and rightfully earned their silver and bronze medals. In fact, I was beyond elated to see them so excited about their second and third place because this year’s Olympics has been riddled with athletes hanging their heads in shame at their silver and bronze medals, as if it’s not still a great honor and accomplishment. So be clear, this isn’t about Lolo should’ve won and those ladies shouldn’t have. What this is about is the way they went on national television and openly hated and disrespected their teammate who just moments earlier was fighting back tears on “Today.”

Even if there is some sort of personal beefs going on within the women’s track & field team, what we won’t do is disrespect each other on a world stage. As a former athlete, I understand wanting the spotlight when you feel like you deserve it. I’ve noted on numerous occasions during this year’s games the way the media focuses more on the losers without properly acknowledging those who succeeded (See Phelps x Lochte, Gabby x Jordyn). I get it. But Kellie and Dawn’s comments weren’t media critiques. They sat there and shamelessly hated. There’s no other word for it. Michelle Beadle’s interview turned into an episode of Bad Girls Club in less than 2 minutes. In light of some of the examples of remarkable sportsmanship we have seen (like Grenada’s Kirani James asking South Africa’s Oscar Pistorius to trade bibs and the efforts of Australia's Sally Pearson and Lolo to console Brigitte Foster-Hylton), it is simply shameful that we can’t even look out for each other. An athlete who earned a medal couldn’t even extol her own triumph because she was too upset with the person who didn’t.  Again, I understand the frustration that comes when you’ve accomplished something great and people just ignore it, but some things don’t need to be said…at least not on national television.

I just don’t know what people want from Lolo. While there are a lot of people supporting and uplifting her, there are just as many tearing her down for no reason. I mean when it comes down to it, what are people really mad about? That she’s beautiful? That’s not her fault. People are mocking her choice to remain a virgin, as if she can’t have that authority over her body. They are hurling insults her way for placing fourth as if simply being in the Olympics isn’t worthy of noting. And when we looked to her fellow teammates for support and kind words, they couldn’t wait to throw her under the bus. What message are we sending? She’s out here competing and representing the US on an international level, and we don’t even have the decency to recognize and respect her as an athlete.

This year’s Olympic Games have become nothing more than a battle to see how cruel can we be. How many US publications can disparage our athletes? How many ways can we rain on a parade or kick someone when their down? I don’t know what it’s all about, but it’s truly disgraceful. It makes no sense that we would just sit around looking for ways to take away from the people who have rightfully earned the chance to represent the United States.