There were several outstanding performances during the College Outdoor Track & Field campaign. MileSplit U takes a look back at the Top 10 moments from the 2012 season.

10. Ashley Spencer, Illinois
Freshman Ashley Spencer became the first Illinois women's track and field national champion in the 400-meter dash, on June 8. On her 19th birthday, Spencer won the 400 title, running out of lane six, in 50.95 seconds. Just last week, she came across the line in a personal-best 50.50 at the World Junior Championships in Spain, to capture the World Junior title.

9. Katerina Stefanidi, Stanford
Stanford senior Katerina Stefanidi was the surprise winner of the women's pole vault at the NCAA Championships. Stefanidi set a new meet record of 14 feet, 7.25 inches in the win, earning the title with an upset defeat over the meet favorite and defending national champion, Arkansas' Tina Sutej (6th, 13-11.25).

8. Brianne Theisen, Oregon
Oregon senior Brianne Theisen won her fifth NCAA title in the multi-events. In June, Theisen captured the outdoor heptathlon title in a personal-best performance with 6440 points. She is tied for fourth on the all-time championship title list, which includes relays and both indoor and outdoor performances.

7. Tony McQuay, Florida
Florida junior Tony McQuay completed the indoor and outdoor double in the 400. McQuay won his second national title at 400 meters in 44.58, at the outdoor championships. He followed up his opening performance by anchoring Florida's 4x400 relay team to a national title in 3:00.02. McQuay split 44.01 for the Gators, who won its first outdoor championship as a team.

6. Natosha Rogers, Texas A&M
Fresh off her first NCAA victory, Texas A&M junior Natosha Rogers had the performance of her lifetime to date at the U.S. Olympic Team Trials. Rogers pulled off an unprecedented second-place finish in the women's 10,000. Despite falling in the early stages, she still ran a personal-best 31:59.21.

4. Cameron Levins, Southern Utah
Southern Utah senior and Canada native Cameron Levins scored 40 points, individually, at the Summit League Conference Championships, winning four events: 800, 1,500, 5,000 and 10,000. Levins followed up his impressive performance from the Summit championships, by winning both the 5000 (13:40.05) and 10,000 meter races (28:07.14) at the NCAA Championships. He became the first athlete to win two titles in the same meet at those distances since Oregon's Galen Rupp did it in 2009.

3. Kimberlyn Duncan, LSU
Duncan successfully defended her NCAA 200 crown in June, winning in 22.86 into a headwind of 2.3 m/s. In the same meet, she ran an all-time college best of 22.19. With the NCAA title, she became the first woman in NCAA Division I history to accomplish the feat of winning back-to-back indoor and outdoor titles at 200 meters. 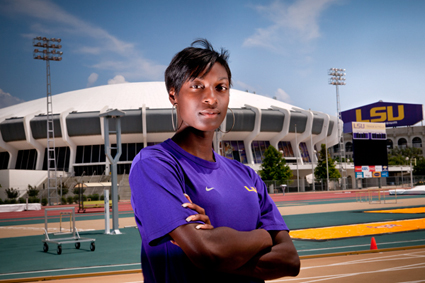 2. Andrew Riley, Illinois
Senior Andrew Riley ended his storied career at Illinois on a high note. Riley won NCAA titles in both the 100 meters and 110 hurdles. He captured the men's 100 crown in 10.27 into a headwind of 2.3 m/s. Riley was victorious in the 110 hurdles with a time of 13.35, despite a 3.5 m/s headwind. He became the first man in history to win outdoor titles in the same year for the 100 and 110 hurdles. 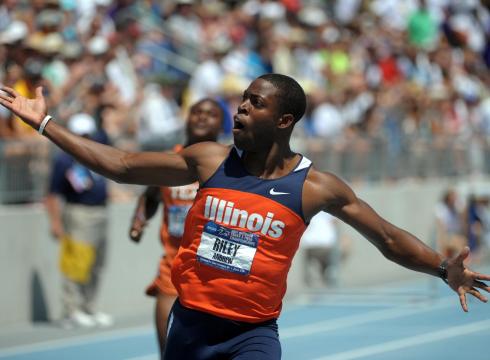 1. Bryshon Nellum, USC
Senior Bryshon Nellum may have had the best performance of the U.S. Olympic Trials, as he finished in a "surprising" third place in the 400, to make his first Olympic team. Nellum earned his London Olympic berth in a personal-best time of 44.80. His performance came as a bit of surprise to all, since he did not make the finals at the NCAA's. But even more of a surprise, since he was shot almost four years ago, three times in the back of his legs after leaving a party at an off-campus appartment near USC. 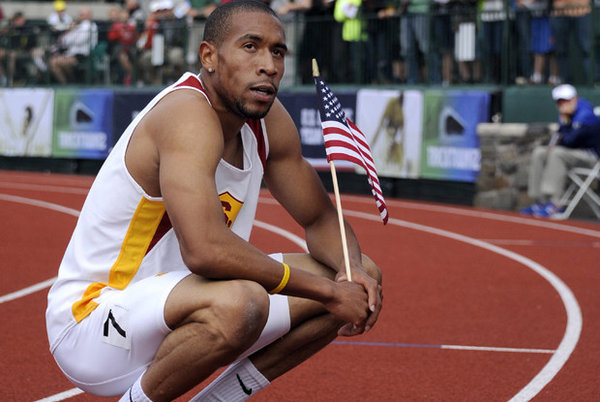